French toast. The only thing we had planned for today was to eat french toast for breakfast. Reagan was going to wake up early in the morning and make her delicious toast added with the rich vanilla extract she bought from our trip to Tajin. We all woke up feeling motivated by the mouth-watering aroma being released from the kitchen and in no time, each one of us was sitting in the dining area. And we ate. We had no plans for what was to come later. There was no "and then", there was no "after", but there was plenty of toast and syrup.

A few moments after I apprehensively snatched the last piece of french toast from the platter, we all dispersed into our own little areas. Little did we know the serendipitous happenings that were going to later unfold.

Trumpets. Cheers. Honks. Laughter. Those were the sounds I heard from my tiny window in my room. Before I had the chance to ask what was going on, Reagan said, "There is a parade outside, let's go!" I immediately got dressed and found the entire tribe gathered around the boulevard next to the beach. The faint smell of sewage was unparalleled to the beauty of the parade. There were colorful feathers everywhere: blue, green, red, white.

Both old women and little girls as young as three were swaying their hips to the sound of the beat. A flock of women and men in blue feathered costumes began walking past us. Many of the watchers as well as the participants of  the parade kept on staring at us and asked for pictures. It was funny, we might as well have had our own float considering the amount of attention that was given to us. Moments later, a group of old men in iridescent button-down shirts passed by and once they noticed the odd view of five Black people, they circled Reagan and cheered her on to dance. And boy, did she dance. It was all very beautiful.

After the spontaneous parade, we all got ready for our goodbye dinner with our teachers. The moment made me realize how quickly the past two weeks had gone. It seemed like just yesterday I was trying to come up with all these mnemonic devices and strategies to teach my Spanish teacher, Mario how to pronounce my name.

The entire day was perfect, ending with salsa dancing at the town square. It was the perfect seal to our beautiful journey. We really had absolutely no idea what the day was going to hold. Being someone who likes everything planned and is intimidated by spontaneity, it has certainly taught me that sometimes, it is best to just wake up and have french toast, and let everything else perfectly and gracefully fall into place.

Reagan, Jordan, Azeb and Zion, I am so grateful to have been able to take this trip with you guys. It has been a really life-changing experience. When we head back, we are probably going to be bombarded with life's obligations, but I will never forget all of our amazing moments (seriously, they have all been captured on my phone) and our hilarious series of inside jokes. 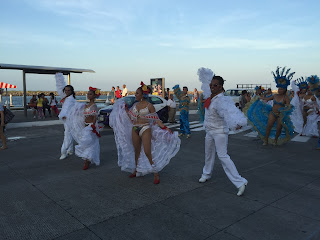 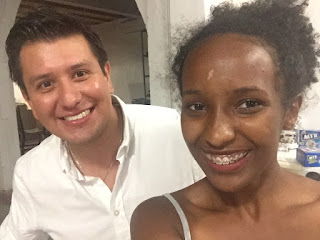 My Spanish teacher, Mario and I

Posted by Many Voices One Tribe at 9:24 PM

Many Voices One Tribe